The North Kootenay Lake Water Monitoring Program (NKLWMP) volunteers will have less of a burden—at least, for a shorter duration—when accessing high elevation snowpacks to conduct research. NKLWMP will use a new snow tube purchased with support from FortisBC’s Community Investment program to collect core samples from snowpacks in the North Kootenay watershed that will be analyzed by hydrologists. But what is a snow tube? What information can collecting snow offer? And what can we do with that information? Great questions—and we have answers.

NKLWMP was formed in 2015 with the goal of improving the understanding of how small- and medium-sized watersheds in the Kootenay region behave in a changing climate, especially in conditions for high and low extremes in precipitation. (An earlier water monitoring project was started by the Kaslo & District Community Forest Society in 2011.) NKLWMP monitors precipitation and temperature, the flows of seven streams, and snow depth and density at two high elevation sites. A third site will be installed in 2018.

“Until the monitoring project started in 2011, there were no data on streamflow for smaller streams in the North Kootenay Lake area,” said Chris Heibert, NKLWMP coordinator, “Because many of our communities are located near smaller streams, and many people draw their water from such systems, understanding how these streams are responding to climate change is an important land-use and policy issue.”

Water you looking for?

The snowpack at high elevations both affects and is affected by climatic conditions. Snow cover helps regulate the exchange of heat between Earth's surface and the atmosphere, and variations in snow cover can affect regional weather patterns. Changes in the snowpack and the resulting spring melt affect the water supplies and quality downstream, used in the Kootenays for residential use, agriculture and electricity generation. The information gathered from sampling the core of the snowpack in the Kootenay region, in addition to basic climate data such as temperature and precipitation, can help researchers predict stream flow volume, freshet timing, low-flow duration and flood potential. 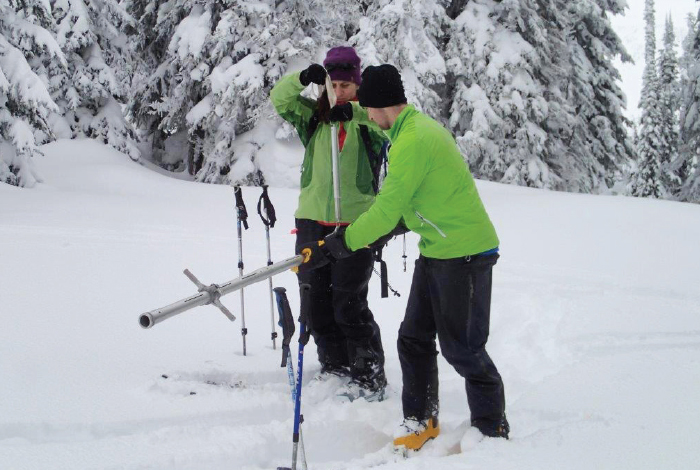 “The need for the program’s monitoring of small- and medium-sized watersheds was emphasized by the Johnsons Landing slide in 2012 and the flooding and debris torrents experienced in 2013,” said Hiebert. “An additional slide just east of Kaslo in 2017 confirmed the need to better understand how water flows around the north end of Kootenay Lake.”

The information about the upper-elevation snowpack is collected by volunteers using snow tubes, which measure snow depth and water content to determine snow density. Snow tubes are rather cumbersome—they consist of six segments with a cumulative length of 4.6 metres (15 feet) and weighing nine kilograms (20 lbs). A special wrench and scale are also needed to take the measurements. 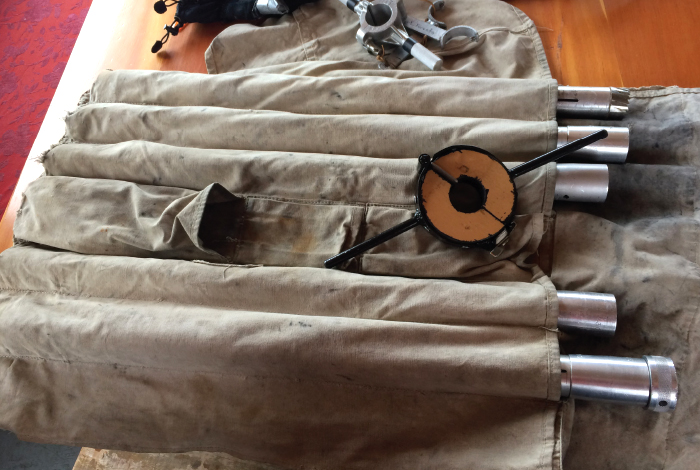 LOAD UP THE BACKPACK: Snow tubes are cumbersome and can be awkward to carry up hill, especially on skis.

Five or six times between January and mid-spring, volunteers on skis pack the snow tubes into high-elevation sites on the east and west side of north Kootenay Lake. The measurements only take a few hours to complete, but accessing the sites involves a two-day commitment.

Before FortisBC’s investment that will provide one set of snow tubes, the equipment was borrowed from Selkirk College and shared with the Provincial Government. This arrangement fit into the group’s small budget but meant that volunteers often had to haul the snow tubes up and down the mountains on their backs.

“Snow tubes are quite large and awkward to transport,” said Hiebert. “Volunteers can now leave the snow tubes up at a cabin instead of bringing them back when needed by the Government or Selkirk College.”

The collected information will help government and private organizations plan and implement adaptive strategies in response to a changing climate.

For more information on the program or to inquire about volunteering, email [email protected].