Georgina Wheatcroft brought home an Olympic bronze medal in 2002; now she works at FortisBC and coaches others.

The first thing you notice when you pick up Georgina Wheatcroft’s bronze medal is the weight. At 576 grams (more than a pound!), the 2002 Winter Olympics medals are among the heaviest ever created for the Games, summer or winter.

“Winning the (Canadian) trials and the experience of going to the Olympics was incredible. The Olympics are completely different – such a bigger stage than anything else.

“Not winning gold was hard at the time. We wanted to win gold for Canada.”

Georgina’s parents were national-level curlers, her brother was a world junior silver medalist in curling and her sister is a national level ice dancer. “We’re a competitive family!”

“My Dad only watched sports and news,” she says. “We always watched the Olympic opening ceremonies, and I told him that one day I’d do that. I always wanted to be an Olympian, even before I knew how I’d get there.”

She tried many sports, “driving my parents nuts.” But when she was 13, she and her brother were not impressed when their parents told them they were all curling in a family bonspiel that weekend.

“But because our parents curled well, our rink did well. So, being young, we thought we did well, too,” she laughs. But she soon realized she’d found her passion.

Looking back, looking ahead

Her favourite memories from Salt Lake City were walking on stage in the opening ceremonies as a Canadian athlete – “To do that is amazing!” – receiving her medal, and attending the gold medal men’s hockey game, where Canada defeated the home-team Americans.

She doesn’t curl any more, but she’s been coaching the women’s provincial-level team for three years. She and one of her former teammates are also coaching her 13-year-old daughter’s team.

“We were roommates for nine years, we’re like sisters, and now our daughters are curling together.”? 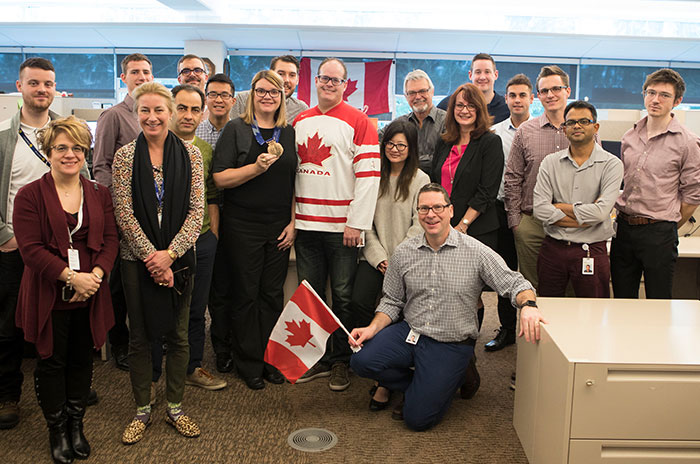 Georgina Wheatcroft with her bronze medal and her Energy Solutions for Transportation
(EST) team. "It's all about the team!" the former Olympian says.