We recognize our business customers here as leaders, showing other businesses in their industry how to make a difference by supporting the growth of sustainable energy in BC. 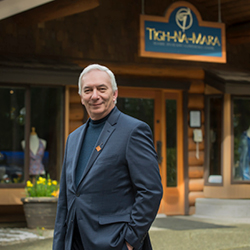 “Making sustainable choices is very important to us… and when a business chooses to use carbon neutral energy that’s made in BC, customers appreciate that.”

​Organization: Fairview Fittings and Mfg. Ltd.
Member since: May 2012

“Signing up for Renewable Natural Gas is really easy. You’re working with a trusted partner in FortisBC, and it’s not just benefiting your own company, it’s benefiting the community.”—Duncan Johnston, CFO

As a customer of FortisBC for over 15 years, Van Houtte has participated in the company’s Spray ‘n Save program, which promotes energy efficiency at the water tap. So when Morten Schroder, VP of operations, was approached by FortisBC to sign Van Houtte up for Renewable Natural Gas, it was a natural link for him.

Morten explains that Van Houtte is a company with an environmental conscience. “We have a number of programs in place to help protect the environment.” From simple habit-changing initiatives like turning off lights upon exiting a room, to bigger changes like replacing delivery vehicles with compact models, Van Houtte is attempting to shrink its carbon footprint one step at a time. With a keen eye towards minimizing waste and reusing resources wherever possible, Morten could see the like-minded values between Van Houtte and FortisBC. More than that, Morten felt compelled to do the right thing.

"We have a responsibility to the environment, a duty. We are always looking for ways to reduce our carbon footprint: [Renewable Natural Gas] is just another way we’re doing that," In the short term, Morten believes his customers will appreciate the effort. For the long term, he expects it to be better for business. "We want to help reduce greenhouse gas emissions. We can’t afford not to. In the end, it will benefit us all."

"With Canada Ticket having zero manufacturing waste going to landfill’s or down the drain and operating one of BC’s largest PV solar systems we were extremely excited to be able to add our Natural Gas consumption to the list of environmental and sustainability efforts.  We strongly believe that participating in a program such as this is necessary for companies such as FortisBC to move forward with developing and marketing renewable resources.“—Wally Robins, CEO

"As a carbon neutral printer, we pay attention to the social and environmental impacts of our business. Through our purchase of FortisBC Renewable Natural Gas, we're able to take another step in reducing the carbon footprint of our print services, and we’re honoured to be a Green Leader."—Richard Kouwenhoven, Senior VP of Customer Service and Business Development

"As an environmentally progressive printer, Renewable Natural Gas fits in perfectly with our approach to sustainable business. And it supports our role as carbon neutral leader in our industry."—Nikos Kallas, President