A 1950’s engineering marvel gets some modern updates

Kootenay Lake is always picturesque, but the view from a power line tower 20 metres (65 feet) above the shoreline is spectacular.

Crossing a lake – no easy task

The story really began more than half a century ago, when the West Kootenay Power and Light Company (WKPL), now part of FortisBC, needed to get electricity generated by its West Kootenays dams to Cominco mines in the East Kootenays; Kootenay Lake lay between them.

The solution was an engineering marvel—the longest power line span of its type in the world when it went into service in 1952 —a three-phase span stretching 3.4 kilometers between 20-metre tall towers on the west side and a single 122-metre tall tower on the east side.

In 1962, the east tower was destroyed by sabotage. People blamed the progress-resisting group the Sons of Freedom, but nothing was ever proven. For a while, citizen patrols watched the towers to prevent further sabotage.

Because clearance regulations had changed since 1952, WKPL and Cominco were able to replace the dynamited 122-metre tower with three 20-metre ones.

A 2015 inspection revealed some electrical failure in the insulators. Because the span was built to handle 170 kilovolt (kV) but now transmits only 63 kV, the insulators were still doing the job, but their time was up.

The tension is intense on lines that long. The crew had to install turnbuckles to ensure it was right on the new polymer insulation, Winter says.

“We called ourselves the Cranking Crew—we did a LOT of cranking!” 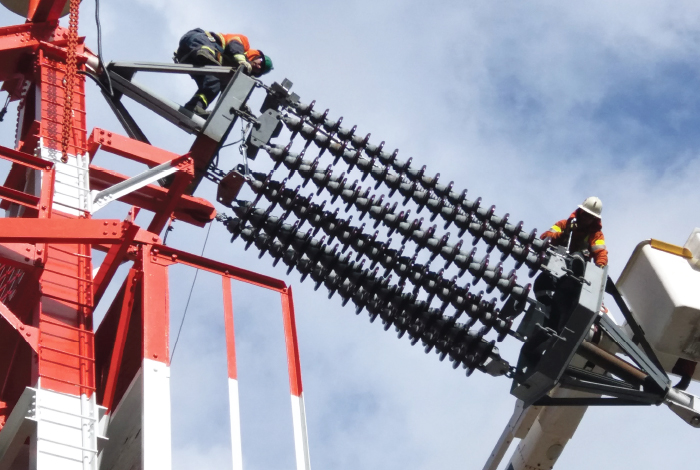 The job was also unique because of the configuration of the porcelain insulators called bells. Each phase had a double string of 216 bells on each side, for a total of 1,296 bells.

“Some companies still use porcelain insulators,” Winter says, “but a setup like this is very rare. I’ve never seen anything like it, even in industry groups on social media.”

“We’ll never do anything like it again,” he added “I was glad to be part of it. We took pride in it.

“This is why I love being a lineman. My office changes every day.”