To recognize Emergency Preparedness Week, we felt a little behind-the-scenes was in order as we walk you through an emergency exercise we conducted earlier this year.

As an energy utility that puts safety first, it’s important for us to regularly update our emergency plans and undergo a series of training exercises. These work out our team’s muscles both mentally and physically so if we ever experience an emergency, we will have the training and experience to ensure the safety of the public, our employees and our infrastructure.

Each year, we conduct more than twenty exercises designed to test our operations and communications response to emergencies. These range from table-top discussions to full-scale exercises. We also involve emergency responders such as fire departments and police as well as local governments. 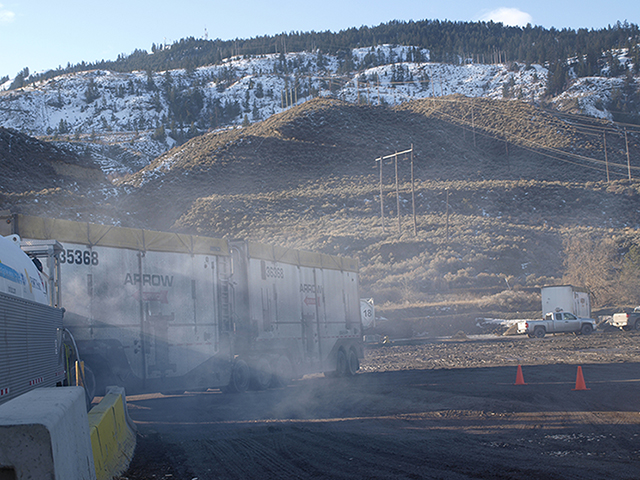 FortisBC emergency exercise and demo at Arrow Transportation’s facility in Kamloops, BC.

In February, members of FortisBC facilitated a liquefied natural gas (LNG) emergency exercise and demo at Arrow Transportation’s facility in Kamloops, BC.

When notification of the simulated emergency was received from our operations team, our headquarters in Surrey, BC, went into full emergency response mode. The emergency operations centre (EOC) was activated, and team members from our community relations, external relations and employee relations teams assumed their pre-identified roles.

Due to the layers of safety at every one of the LNG refuelling stations, the likelihood of a real emergency taking place is quite remote, so our simulation team had to work hard to come up with a scenario. A tractor trailer was parked near the refuelling unit and the leaking LNG was simulated by a smoke machine to make it feel real for responders on site.

In order to simulate an impact, the scenario involved a driver fictitiously temporarily losing consciousness. Following the fake impact, the driver was helped from the vehicle and immediately brought to a safe area. The emergency alarm sounded and all staff headed to a muster area where personnel were accounted for and a safe perimeter was established.

FortisBC’s crew were contacted and arrived on site to assess the situation and determine a plan of action. The local fire department as well as the RCMP arrived to redirect traffic until the assessment of the LNG leak was completed and the area declared safe.

Back at the EOC in Surrey, the external relations team enacted its own plan and worked very closely and effectively with the team on the ground to gather information and ensure business operations continued. And even though it was an emergency exercise, there was a buzz in the room of heighted awareness. The emergency team was in the full swing of things – preparing messaging, liaising with government, executing tactics, engaging on social media and planning for calls from the public and the media.

Without a doubt, emergency exercises are invaluable not only for our business but to those who can potentially be affected by it.  Any emergency can significantly impact the community and FortisBC’s employees and customers. It is our role to ensure the safety of all those involved and impacted, and we take that role seriously, which is why we ensure our employees are well trained and prepared.

A few fast facts about LNG

Want to save money, maintain the life of gas appliances and stay cosy?