FortisBC owns four hydroelectric generating plants on the Kootenay River with a total capacity of 225 MW. They are the Corra Linn, Upper Bonnington, Lower Bonnington and South Slocan Plants. Combined, these plants provide about 45 per cent of the annual electricity needs of our customers. 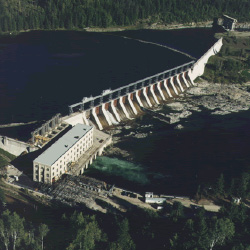 The Corra Linn Dam was initially built in 1932 to control upstream storage in Kootenay Lake and generate power through three 19,000 horse power units operating under the depth of water behind the dam of approximately 16 meters. The generating capacity is 51 MW. The Corra Linn Dam is located on the Kootenay River, approximately 15 km (nine miles) downstream of Nelson on Provincial Highway 3A. 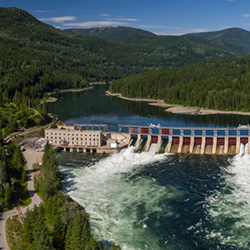 The Upper Bonnington Generating Plant consists of six hydroelectric units in two adjacent powerhouses, a 15 meter high concrete gravity dam, a powerhouse comprised of two sections, a gated spillway and an overflow spillway. The original powerhouse was built in 1907, upgraded in 1916 and extended again in 1939 for a total rated capacity of 65 MW.  Upper Bonnington is located on the Kootenay River, approximately 17 km (10 miles) downstream of Nelson. In 2018, Hydro Review inducted the plant into their Hydro Hall of Fame, a program that recognizes extraordinary hydro achievement throughout the world, with a special emphasis on long-lasting facilities. 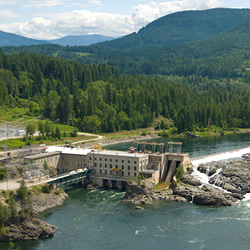 The Lower Bonnington Dam is comprised of a powerhouse behind an intake dam on the right bank of the Kootenay River and a concrete gravity structure approximately 18 meters high. The original dam built in 1897, was comprised of a rock-filled timber crib dam, which straddled the river upstream of the falls at this site. The dam was rebuilt in 1924 with a new plant including three units increasing generating capacity to 54 MW.  The Lower Bonnington Dam is located on the Kootenay River approximately 18 km southwest of Nelson. 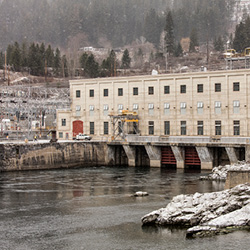 FortisBC also operates and maintains five generating plants owned by others, with a total generating capacity of 1,322 MW:

Learn about the hazards around dams and how to stay safe.